The Nine Lives of Blackie the Cat is an ongoing drawing series by Gary Baseman that started in Summer 2020, inspired by his long time art collaborator Blackie the Cat. Selected works from the series will be made into print sets of 3, exclusively available from Baseman Studio. This first set includes Blackie as an artist (with cameos of Dumb Luck and Toby; Blackie as the Patron Saint of Compassion (Purr), holding Gertrude and a chalice of H20; and Blackie playing Joker.

In his nearly 18 years of life, Blackie the Cat (2013–2020) contributed greatly to Gary Baseman’s art world, inspiring multifaceted original characters designed by the artist and collaborating on a number of interdisciplinary projects like The Purr Room. The Nine Lives of Blackie the Cat celebrates the spirit of creativity and the power of unconditional friendship. Baseman’s interpretations of his feline companion expand the artist’s traditional thematic explorations, showing appreciation for culture and entertainment, as well as the attributes that made Blackie the Cat unique.

Each set includes 3 signed and numbered giclee prints (edition of 100), each measuring 7 x 5 inches. Starting 9/24 at 9am PDT, go to the webstore to acquire affordable Baseman art. 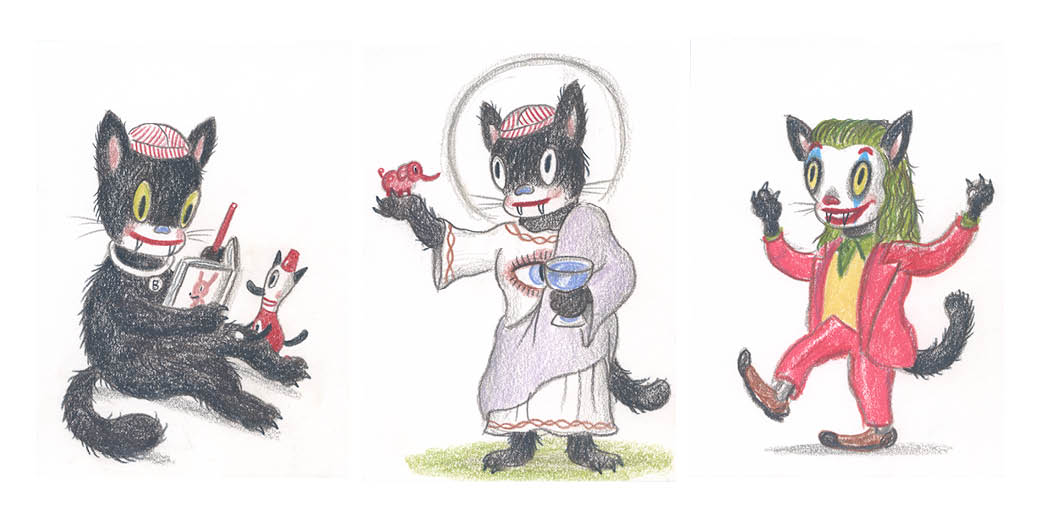 HOW BLACKIE STOLE CHRISTMAS! I wonder who will ste

GOOD RIDDANCE 2020 SALE at GaryBaseman.com. For 24

GOOD RIDDANCE 2020 SALE at GaryBaseman.com. For 24

A Quiet Caturday. Thankful that the Spirit of Blac

THE 9 LIVES OF BLACKIE THE CAT PRINT SET #2!Availa

A BLACKIE THE CAT balloon should be a Macy’s Tha

THE 9 LIVES OF BLACKIE THE CAT PRINT SET #2!Availa

GOTH AHWROOS coming BLACK FRIDAY! We will offer a