Created in 2014, the original painting of The Portrait of Toby traveled internationally as part of The Pictoplasma Portrait Gallery featuring the work of 100+ international artists, designers and illustrators. In this artwork, Baseman explores one of the most transformed genres in art history by creating a portrait honoring one of his most beloved characters: Toby. Accompanied by other Baseman characters and loyal friends Creamy, Venison, Dumb Luck, ChouChou, Ahwroo, WildGirl and Hotchachacha, Toby remains a central figure in Baseman’s world.

Originally created as an acrylic painting, Baseman Studio has made an affordable fine art print available HERE now.
Shipping from the webstore will begin the week of November 15. 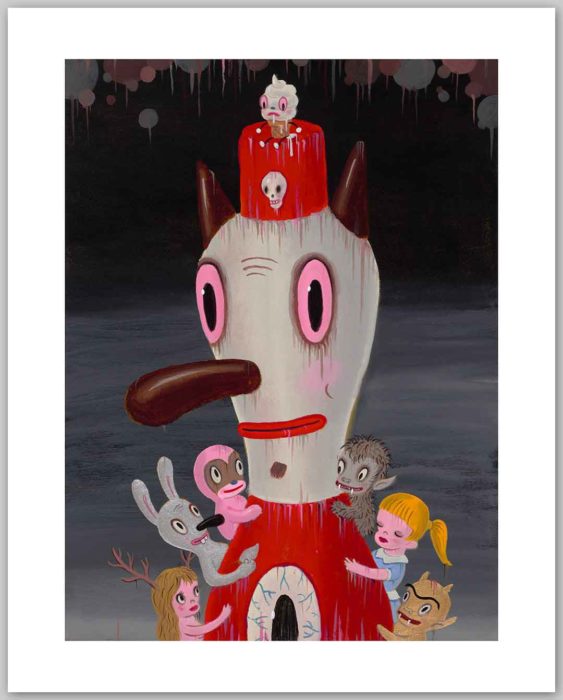 Last Chance for THE MASK OF BLACKIE THE CAT! Very

I AM YOUR PIÑATA! I can’t believe today is the

How many LIVES do you have left? Which life are yo

LEARN THE HISTORY OF BLACKIE THE CAT. We created a

LOVER BOY! Blackie the Cat had NINE LIVES and one

SPECIAL MASK! Only available to our NEWSLETTER REC

BLACKIE’S PET! I was as much Blackie’s Pet as

BAD ASS! Blackie the Cat was a Bad Ass! Just one o

ALL GONE! Like a Spirit in the night! My Nightmar

Another Birthday! Spending so much time on my upco

Two Birthdays are coming up and a big opening in t

TODAY is ELIFANT APPRECIATION DAY! So we cut a spe