Pronounced “ah-wrooo” like an animal howling, Ahwroo is a ferociously cute creature inspired by the werewolf, representing “the hunger and the drive that humans can have when they want something or someone unattainable” (Baseman, 2012).

3DRetro produced a vinyl version of Ahwroo in several colorways including original bloody, metallic, and a rainbow set of blue, red, purple, and green–the Ahwrainbow Ahwroos. 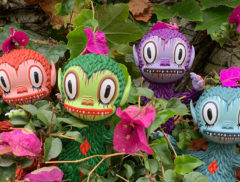 BOSKO vs. the CROWS! Outnumbered a hundred to one.

CLOSE TO MY HEART. Thanks @morphikla for the beaut

BABUSHKAT! Lil BOSKO was inspired by seeing a phot

SELF-PORTRAIT OF ME AS BLACKIE THE CAT 2021. Black

BOSKO lost his ONLY ONE WHITE WHISKER!!! I had to

MISSING!! BOSKO lost his ONLY ONE WHITE WHISKER!!!

IN ALL MY GLORY! 20 years ago today. I love lectur

WILD THING. I was planning to cut my hair after my

My Childhood Home. Looks like my family is selling

VACCINATED! Grateful to get my 2nd Dose. Looking f